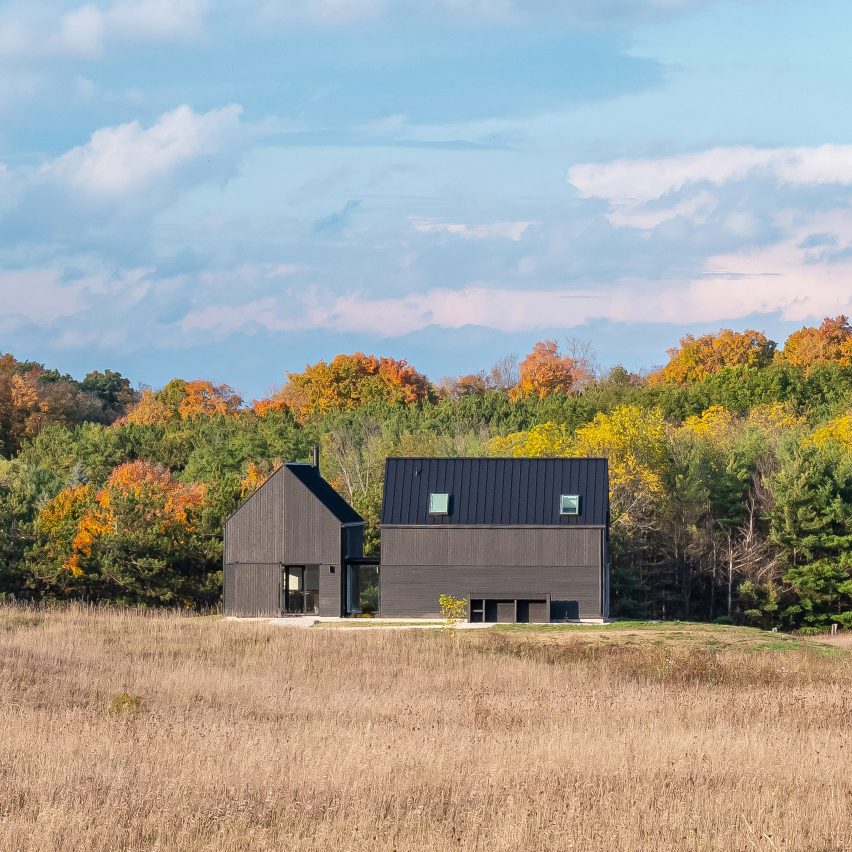 Toronto-based architect Wanda Ely has completed a country home for a Danish family, combining the Scandinavian principles of “simplicity, functionality, and restraint” with the local design style.

The Sommerhus project (Summer House) is located in Mulmur, Ontario, roughly 100 kilometres outside of Toronto. It sits in rolling wheat fields, on land that belongs to a tight-knit, extended family that gathers there for vacations and celebrations.

“By blending the core Danish design principles of simplicity, functionality, and restraint, with touches of Ontario rural vernacular, this project is a contemporary interpretation of the traditional Danish Sommerhus that is rooted in both its local context and the clients’ family history,” said Wanda Ely, who has run her eponymous studio since 2011.

The property has two volumes oriented perpendicularly towards each other. The two-storey structures are topped with gabled roofs that resemble buildings found in this rural setting.

Both are clad in black wooden siding, lending them a starkness that contrasts with the surrounding woodlands.

“As you approach the home, the two barn-like volumes reveal themselves,” said Ely. “The public and private uses are split between the two volumes – the kitchen, living, and dining area are housed in one building, and the bedrooms and bathrooms are located in the other.”

Connecting the two volumes is a short corridor lined with floor-to-ceiling glass walls. According to the architect, this gives the impression of exiting one building before the entering the other, while remaining protected from the elements.

The public areas have a double-height ceiling that takes advantage of the full building envelope and creates wide-open interiors.

“The roofline of the building is expressed in the form of lofty, vaulted ceilings,” said Ely. “Anchored by an extruded volume for the fireplace and a large corner window in the living room, the gracious open-concept room offers multiple distinct living areas within it.”

Within the private volume, the architect included the larger, primary suite on the ground floor, and three bedrooms upstairs for children.

A generously sized terrace connects both wings of the L-shaped plan, and extends the living spaces in the summer months. “It is an entertaining space large enough for the entire extended clan to gather together, and large enough for multiple dining and seating areas,” the architect said.

“Planting is thoughtfully integrated into the deck, and overtime will help it blend into the site,” she added.

The home’s interiors are restrained, with a palette of pale woods and white walls, and openings that are intended to frame the site’s seasonal landscape.

“The stark palette of black and white is a hallmark of Scandinavian design and keeps the focus on the spatial qualities of the rooms, and the views out to the surrounding landscape,” Ely concluded.

Other recently completed Canadian projects include a “beach house” located near Toronto’s downtown area, and an expansive property on the shores of Lake Ontario designed by Omar Gandhi Architects.

The photography is by Scott Norsworthy.