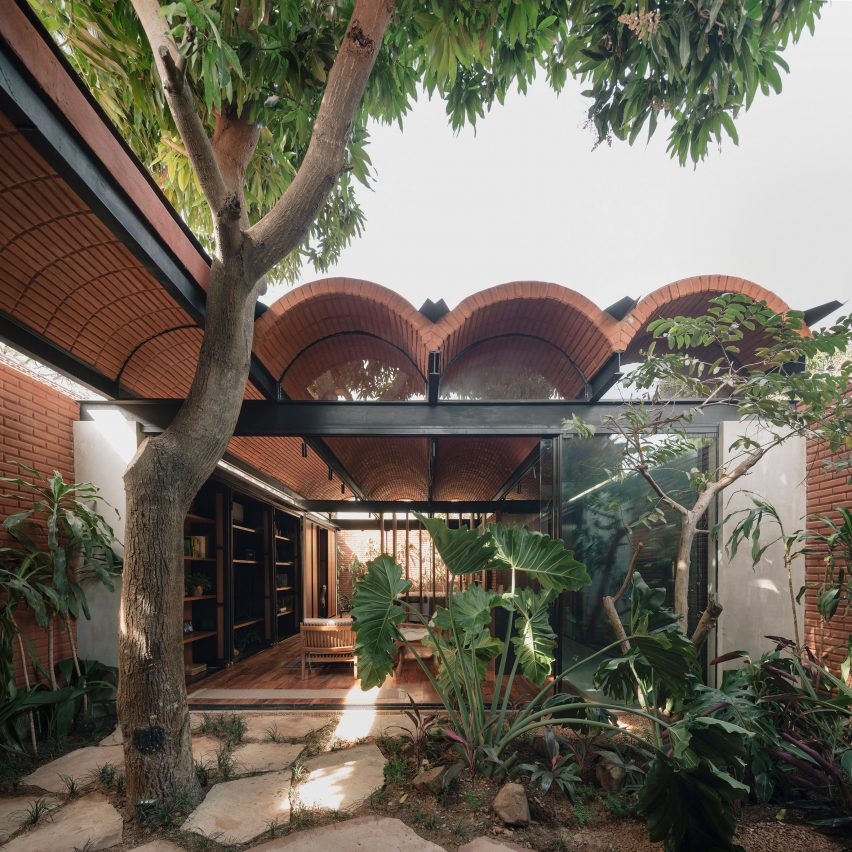 Paraguay studio Equipo de Arquitectura has completed a residence with vaulted brick ceilings on a narrow lot in Asunción, which opens to a courtyard with a mango tree.

The Intermediate House comprises two blocks either side of the central, open-air courtyard.

The architects referred to the entrance block as the “quincho”, which loosely translates to “gazebo”, while the second block at the back on the site contains the living room, kitchen, and bedroom.

“The goal was to create a fluid and flexible space with natural sunlight, cross ventilation and a constant contact with nature,” said Equipo de Arquitectura, which is based in the city.

The walls and ceiling throughout the building are made of manually pressed, uncooked dirt bricks. The same bricks are arranged with gaps in-between on the street-facing facade.

Four vaults span the roof, resting on black steel I-beams. The voids between the structural supports and the arches are filled with glass.

“Using local materials such as earth and wood we created a space that is open and closed at the same time,” said the studio. “That is why the project is named Intermediate House.”

Shelving, desk space, food preparation area, and an entertainment system were designed to be part of the concrete slabs that hold up the I-beams.

Putting most of the furniture in the walls, which can be covered by folding wooden doors, helps to make the most of the 7.2-metre-wide lot. Equipo de Arquitectura used designs by 20th-century modernist Louis Kahn to inform this tactic.

“These frames are the actual frames of the furniture,” said the studio. “So the structural support turns into the functional support, or vice versa.”

“With Kahn we learned that structural support can become functional support, which is why the entire roof of the house rests on the furniture that makes up the perimeter of the property,” they added.

Other furniture items in the centre of the rooms can be moved when needed to open up the space.

Glass doors allow the back block to be closed off from the courtyard, while the quincho remains open.

Sliding wooden slats can also be used to conceal the living room from the bedroom, which is the last in the sequence of indoor spaces on the linear plot. 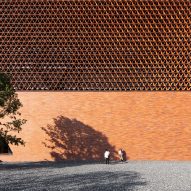 Beyond is another garden at the rear of the house, which can be accessed through the bedroom.

A glass wall dividing the two brings in extra light and offers views of the greenery.

Throughout the residence, the floors and wooden slats are made out of curupay – a local wood.

“Everything was made by local craftsmen, so the processes were pretty slow and delicate,” said the studio.

For more homes that utilise space on narrow lots, see this list of 12 skinny houses that make the most of every inch.

The photography is by Federico Cairoli.