Pavilions in the shape of a bee colony and the northern cardinal bird are among the beach huts built on Woodbine Beach in Toronto for this year’s annual Winter Stations competition.

The six pavilions erected on the beaches of Toronto and nearby Hamilton each aim to respond to the theme “resilience” – a reference to the trials endured through the pandemic.

“Over the last eight years, we have managed to draw thousands of people down the beach in the colder months and that’s something we’re proud of.”

Winter Stations was founded by RAW Design, Ferris + Associates and Curio in 2015. The annual contest was launched to give emerging designers a chance to see their work built and displayed to the public.

Previous winners include a team from the University of Waterloo.

Last year, a delayed show was oriented around social distancing, and saw one structure covered in seedlings.

Read on for this year’s pavilions:

Cemre Önertürk & Ege Çakır of Turkey designed this series of black boxes in reference to the increased amount of screen time caused by the pandemic.

Each box allows for a few people to look out through “screens” and observe the view, simulating isolation. According to MELT it “presents a spatial atmosphere that brings people together by means of a common visionimage while isolating them physically”.

Wildlife-guard Chair by Mickael Minghetti, with the guidance of Andres Jimenez Monge

Emulating the shape of a northern cardinal, a bird that occupies the lake all year long, a wooden barrier shields the viewing station from the elements.

“The diversity of species taking refuge in the dense urban environment is both remarkable to observe and critical to preserve,” said the designers of Wildlife-guard Chair.

Launched in Hamilton, Ontario this installation will move back to Toronto in early March 2021.

The Hive by Kathleen Dogantzis & Will Cuthbert

Shaped like a bee colony, The Hive was part of a selection through Winter Stations’ partnership with Young Women’s Christian Association (YWCA) Toronto. It is dedicated to the gender-diverse residents of the shelters in the city’s East End.

The transparent acrylic provides warmth from the sunlight and view. 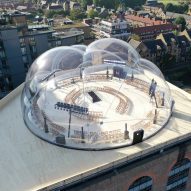 “We wanted our design to offer a place of respite for visitors,” said the artists. “We also wanted the installation to vibrantly stand out against the lake, sand, and snow.”

“We hoped to immerse people in the honey bee world and get them to think about what it means to work together as a community towards a single goal,” they added.

S’winter was constructed from beach towels formed into concrete panels.

“Playing with the idea of reflection, we utilizs mirrored walls to cast the visitors as the subjects of our bright red pavilion,” said the designers of Introspection.

A trellis roof lets in light and a lifeguard chair stands in the middle of the pavilion.

“Here we symbolise bridging the gap between Indigenous and non-Indigenous Peoples through gathering,” said the designers of One Canada.

The installation takes symbolism from the Anishnabae Peoples and gestures towards the contemporary issue of Truth and Reconciliation.