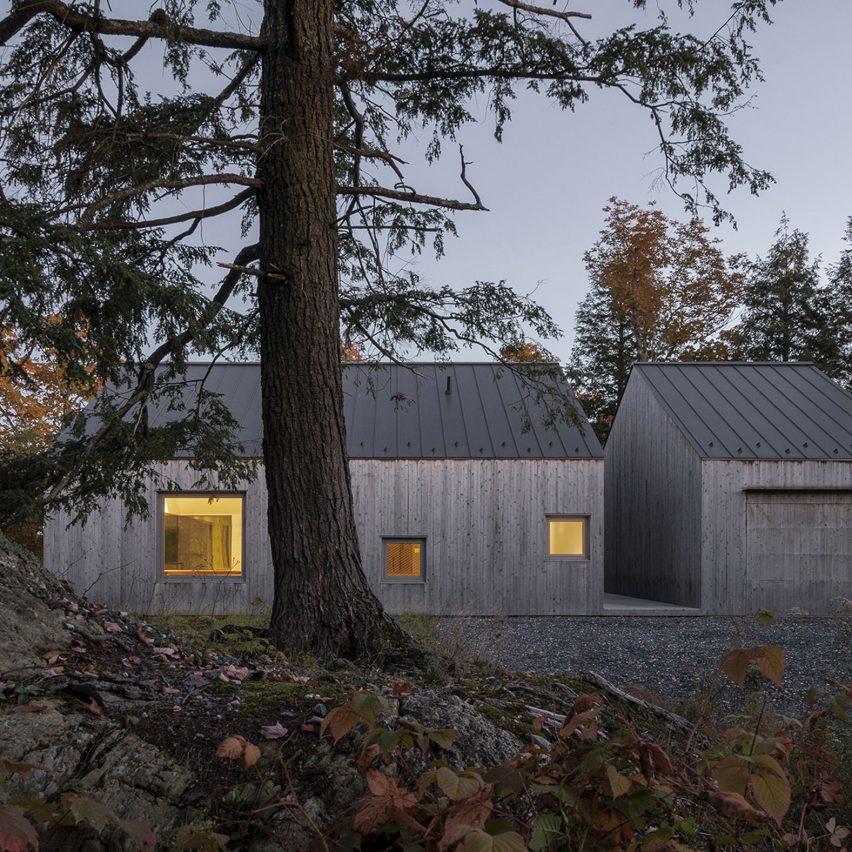 A narrow passageway divides this cottage with a metal roof by Naturehumaine, marking the entrance to the home and providing privacy to a detached guest suite and atelier.

The opening lends the cottage its name, La Brèche, which roughly translates to The Fault. This was the driving concept for the second home near Quebec’s Orford ski resort.

“The client’s functional needs are strategically distributed inside two independent volumes connected by a walkway forming a breach through the house,” said the Montreal-based architects.

“The main volume hosts the living and sleeping spaces, while the second volume contains functional areas such as a workshop and a guest bedroom loft with its own bathroom,” Naturehumaine explained.

The building’s exterior was inspired by the vernacular constructions of the area, a region of Quebec known as the Eastern Townships.

“Combining the desire for both a contemporary expression and inspiration from traditional architecture, the volume of the house adopts a gabled roof combined with sleek details such as the absence of roof projections, a mullion-less glazed corner with silicone joints and frameless window openings,” said Naturehumaine.

The smaller, secondary volume contains the garage and a workshop, which has a lofted bedroom above and its own bathroom. Its size and shape match the main part of the primary volume, as if the two had been continuous but then cut in half.

“The overall impression gives the illusion that a natural phenomenon has split an initial entity into two distinct parts,” said Naturehumaine.

“Mostly, this passage offers a dramatic perspective framing the landscape behind the house,” the team added

The larger portion contains two bedrooms near the entrance. 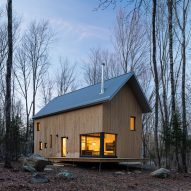 A hallway leads past them to an open-concept kitchen, living and dining space with tall windows that look out onto the site’s dense wooded surroundings.

At the back of the property, a compact terrace is adjacent to the living room, offering a place to sit in the warmer months.

Contrasting the exterior, the interiors have a monochrome palette. Subtle details including a polished concrete floor running throughout, white walls with no baseboard or molding, and vaulted ceilings that follow the roof’s outline all contribute to the contemporary feel.

Naturehumaine was founded in 2004, and has completed a variety of residential commissions within and around Montreal. Other residences by the studio include a compact cabin with a pointed titanium roof, and an extension to a Montreal townhouse with a plywood staircase that conceals a children’s play space.

The photography is by Ronan Mézière.