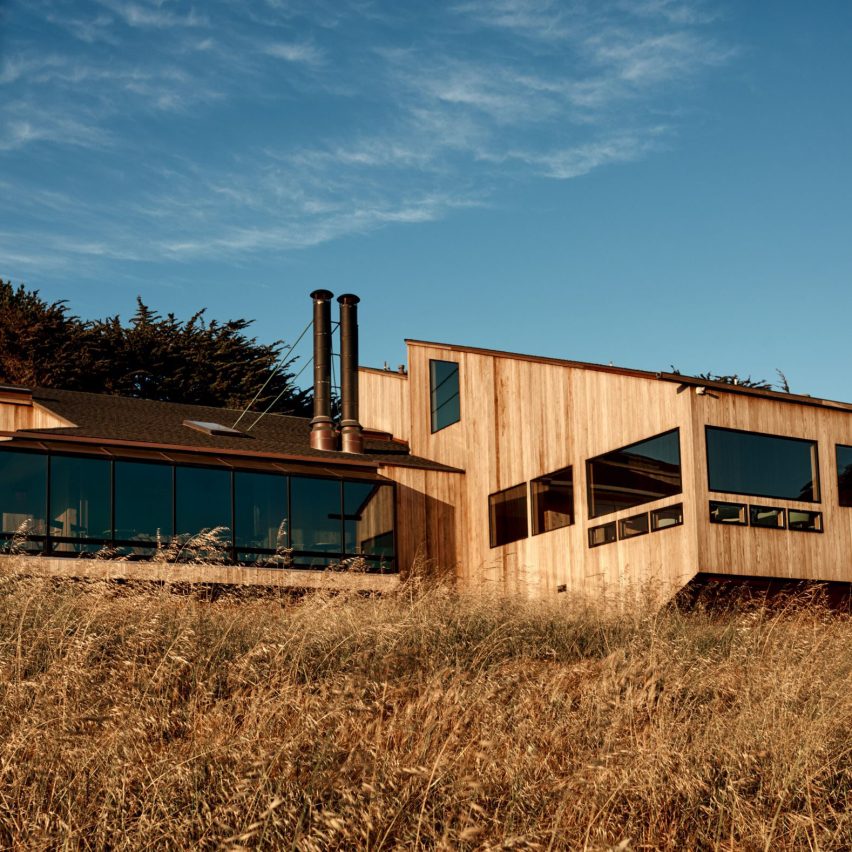 Architecture studio Mithun, along with design firms The Office of Charles de Lisle and Terremoto, has overhauled a cedar-clad lodge in a famed California community along the Pacific Ocean.

Located about 100 miles (160 kilometres) north of San Francisco, Sea Ranch is a planned development that stretches along a rugged coastline and features private dwellings set within trees and meadows.

The community was established in the early 1960s by architect and developer Al Boeke, who enlisted fellow architects to create modern-style structures that worked in harmony with the natural landscape.

The Sea Ranch Lodge opened in 1964 and served as gathering place for residents. The building was designed by a group of architects who reportedly drew inspiration from rustic barns.

Over the decades, the lodge underwent various modifications. In 2018, it was purchased by new owners who wanted to restore the building in a way that honoured the original design.

Three firms were commissioned for the project: Mithun, a Seattle-based architecture firm; The Office of Charles de Lisle, an interior design studio in Sausalito, California; and Terremoto, a landscape architecture firm with offices in San Francisco and Los Angeles.

“The goal in updating the lodge was to simplify and clarify the original structure to focus the experience on the natural setting and exceptional views,” the team said.

Asymmetrical in plan and form, the building consists of rectilinear volumes topped with shed roofs. Like most structures in the area, exterior walls are clad in wood – in this case, western red cedar.

Limited changes were made to the exterior. The siding and roofing were replaced, as were windows and skylights. Existing mailboxes, which are still in use, were kept intact.

Marking the entrance is the original Sea Ranch logo, designed by Barbara Stauffacher Solomon, which is shaped like a ram’s horns – a reference to sheep that graze in the area. The logo was repainted during the recent renovation.

Inside the lodge, walls and partitions were removed to strengthen views and bring in more daylight. Public spaces were re-oriented toward a meadow that slopes down toward the ocean.

“Spaces were opened and recombined to create a simpler plan with better connection to the exterior,” the team said.

Rooms feature low lighting, comfy furniture, bold graphics and cedar wall panels. A fireplace in the lounge is made of rough concrete with embedded stones. 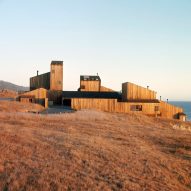 The team used simple materials that were informed by the original design.

“The intent was to furnish the space in an organic, casual manner, with loose references drawn from the many styles that have been used throughout the building’s history,” the team said.

For the landscape, Terremoto aimed to “do right by the site” and create an environment that felt wild yet restrained.

“The designers let their egos go very quiet and channeled messages from the site and Sea Ranch philosophy to clarify and improve the landscaping,” the team said.

With the lodge project now complete, the owner plans to move on to phase two – renovating 16 guest rooms on the 53-acre (21-hectare) lodge property and creating space for special events.

Sea Ranch was the subject of an exhibition at SFMOMA several years ago. Other buildings there include a cedar-clad holiday home by Malcolm Davis Architecture, and a wooden cabin that was restored by Framestudio and originally built by American architect Joseph Esherick as a model for low-cost holding housing.

The photography is by The Sea Ranch Lodge.