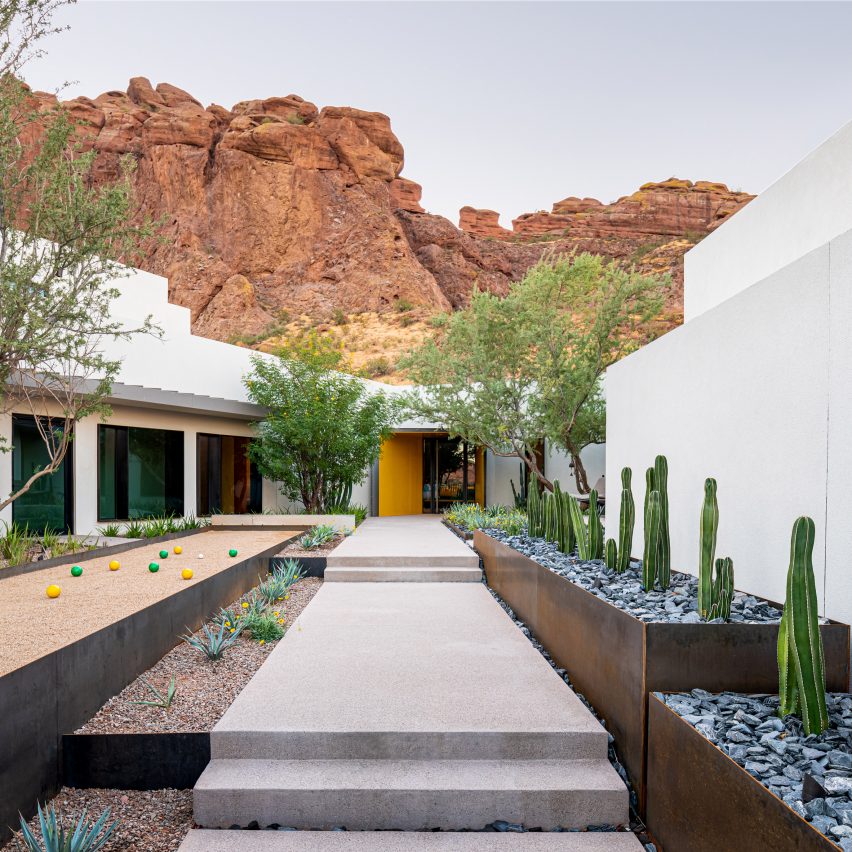 This home at the foot of Camelback Mountain in Arizona has been thoroughly renovated by 180 Degrees Design + Build and CBTWO Architects with updated finishes and a new double-height living room.

Located in Phoenix, the Brandaw Residence was originally built in the 1960s, and in need of a refresh.

The team completely re-clad the exterior of the 4,930-square-foot (458-square-metre) home in a white stucco finish. They also took this opportunity to simplify its form, creating orthogonal corners and a consistent line at the parapet.

“Our goal was to focus less on the architecture, and allow the beauty of the site dictate the organisation of space, both horizontal and vertical,” said the team. “From here it was an exercise in restraint and subtraction.”

The residence is V-shaped in plan, with two wings that meet at a central living room.

This space was demolished and rebuilt completely, receiving a new pitched roof that directs the gaze upwards and towards the mountain behind the home.

“The design team, along with the owner, agreed to reorganise much of the interior uses to create a stronger relationship to its environment, allowing the interior spaces to capture the incredible dynamics of the surrounding mountains and distant views,” the architects explained.

The entrance to the home is at the intersection of both wings, which now is highlighted by a yellow steel portal.

“The steel portal, painted in vibrant yellow to mimic the yellow blooms of the desert plants, compresses as you enter the home,” said the architects.

Immediately through the door is a dramatic fireplace that creates a separation from the entrance and the living room beyond. 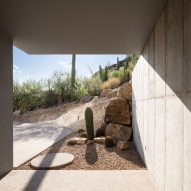 Concrete home by HK Associates looks onto the Arizona desert

Full-height glazing wraps this room on two sides, helping to connect the interior living spaces to the back yard, which was also overhauled as part of the renovation.

“The beauty of the architecture now becomes a canvas on which the desert environment and mountain can exist,” said the architects.

The wings of the home contain four bedrooms and other private areas, with the primary bedroom enjoying its own wing for additional privacy.

These areas received a lighter touch but were still updated with new flooring, finishes, and simplified windows that give the residence a cohesive feel.

Phoenix is among the fastest-growing US cities, resulting in many new-build and renovation projects.

Others to recently complete include a home with a “zen-like” quality and a board-marked concrete residence for a ceramicist.

The photography is by An Pham.