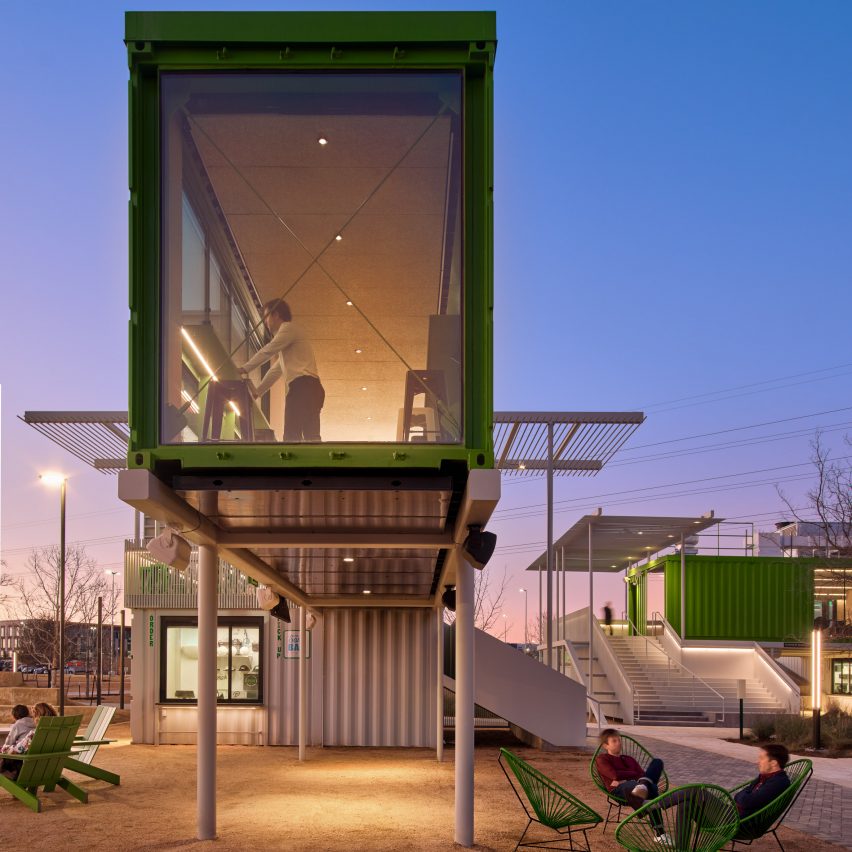 The complex, called The Pitch, comprises 23 repurposed containers used for a variety of purposes and configurations throughout the site.

“We have previously studied the use of containers for commercial, retail and multi-family designs all of which were un-built; we feel that The Pitch is the first project of its kind in Austin and the region,” said Mark Odom, founder of the studio.

By stacking the containers on top of each other and by using stilts, Mark Odom Studio was able to create two separate storeys for the site. The two layers allowed for the containers to be turned on their axis to increase shade and views of the surrounding area.

The containers were painted a bright green, the colour of Austin FC soccer team, and the complex is meant to serve in part as a place for fans to congregate, eat, and watch games. The complex also abuts the team’s practice stadium.

“Each building pod is organized and stacked differently while they all use the same custom detailing, material and color,” said Odom. “This allows the focus on the true form of each container to be consistent.”

According to the architects, the original site was flat and so was heavily landscaped in order to have the containers “nestle” into the topography.

Ground-floor containers house restaurants and vendors, while the upper levels have enclosed spaces for gatherings and private events, as well as offices and to serve as viewing decks. While the complex is meant to host events related to Austin FC, the complex is also open to the community. 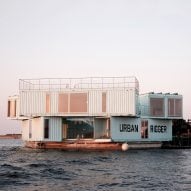 Twelve buildings that demonstrate the breadth of shipping-container architecture

“As each pod was curated differently, the experience and views will also entice users to walk around and explore,” said the team. The interiors, also designed by Mark Odom, feature black rubber flooring for acoustics, walls of naturally finished plywood, and ceilings of painted Tectum panels.

Three of the 40-foot containers were placed on their ends to serve as “way-finding nodes”.

Further additions to the containers were made by opening up the sides and putting in glazing. Trellises, vertical tube railings, and custom stairways were added to expand the space and create natural flows between the structures.

A canopy formed from a mass-timber structure with a ballasted roof stands on eight-inch (20-centimetre) steel tubes.

Other recent projects that use shipping containers include this portable house made in Poland and a demountable stadium in Qatar.

The photography is by Casey Dunn.