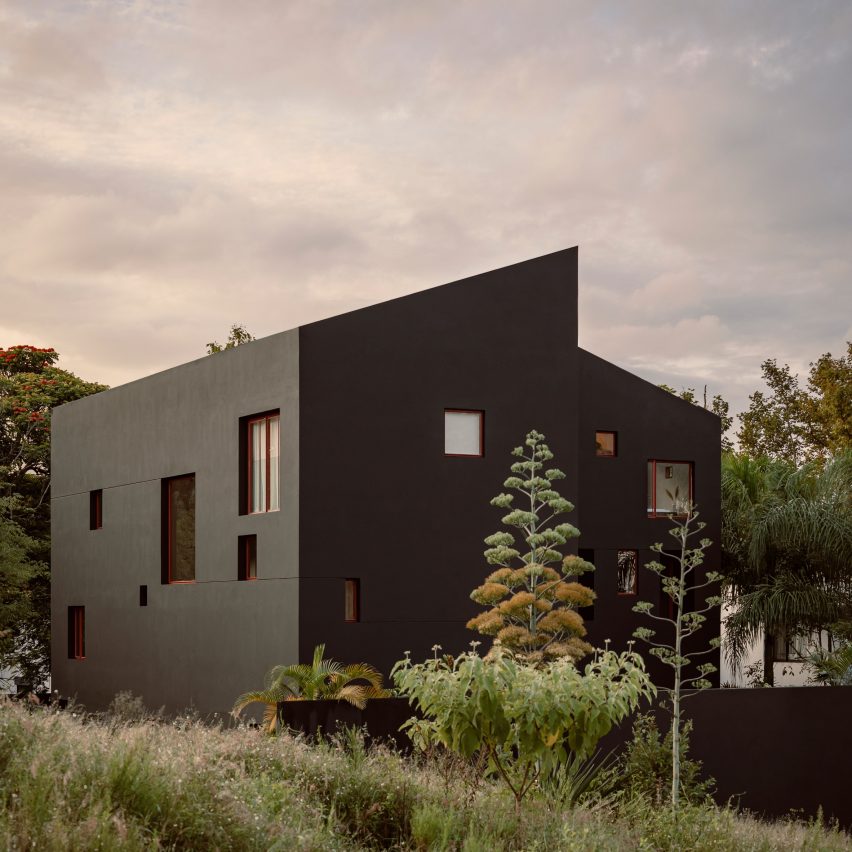 Mexico City-based Lopez Gonzalez Studio has carved a terrace into a gabled rooftop on a black house in Xalapa, Veracruz.

Designed for a growing family, the House in Xalapa is a three-storey structure set against a backdrop of lush vegetation.

The 528-square-metre residence sits on a slight slope that is mirrored in the angles of its roof.

To make the home stand out in the suburban neighbourhood, the simple geometric form of a traditional gabled house has been modified and abstracted into a more minimal and contemporary design.

“In this case, the shape is the result of our site analysis and the idea of proposing a house that felt strongly connected to the place,” studio principal Pedro López González told Dezeen. “In a very abstract way, the house is a typical gabled house.”

The exterior surfaces are covered in a cement render and painted black to further emphasise the simple architectural forms.

“The exterior cladding is a very simple flattening done by local masons with a sponge,” said González. “The intention was to obtain a natural and irregular texture that would absorb the climatic conditions of the region and show them over time.”

The facades are dotted with asymmetrical windows, which are “organised around a continuous dialogue with the landscape” according to the studio.

Maroon-coloured frames were chosen for the windows and door to stand out against the black walls.

A large “crack” at the apex of the roof continues down through the envelope, revealing a crenel for the recessed rooftop terraces that are undetectable from the outside.

The tiled terraces have planters with tropical plants and geometric sculptures. Their floors are made of recinto, a type of volcanic stone, which, in the walled patio at the rear of the home leads to a swimming pool.

Large glass doors connect the outdoor spaces with inside, where the dark colour of the exterior is continued with rich, veined marble used for the flooring.

This visual link is intended to give the impression of a “monolithic” effect, according to González.

Three large concrete slabs lead to the entrance of the home, which is recessed and framed by two walls that continue around the whole of the property.

Inside the house is divided into social spaces on the ground floor with “transitional spaces” like an entertainment room and study on the first floor.

The top floor houses the main bedroom suite, which leads out to one of the private terraces — separated from the bath tub by a glass wall. This terrace steps up to the primary rooftop area.

In contrast to the dark stone floors and exterior, the interior ceilings have closely spaced rafters of pine.

House in Xalapa is one of Studio Lopez Gonzalez’s first ground-up residential designs.

Other architectural projects in the Mexican state of Veracruz include a pitched-roof structure built to revitalise public space at a port on the gulf coast.

The photography is by César Béjar.