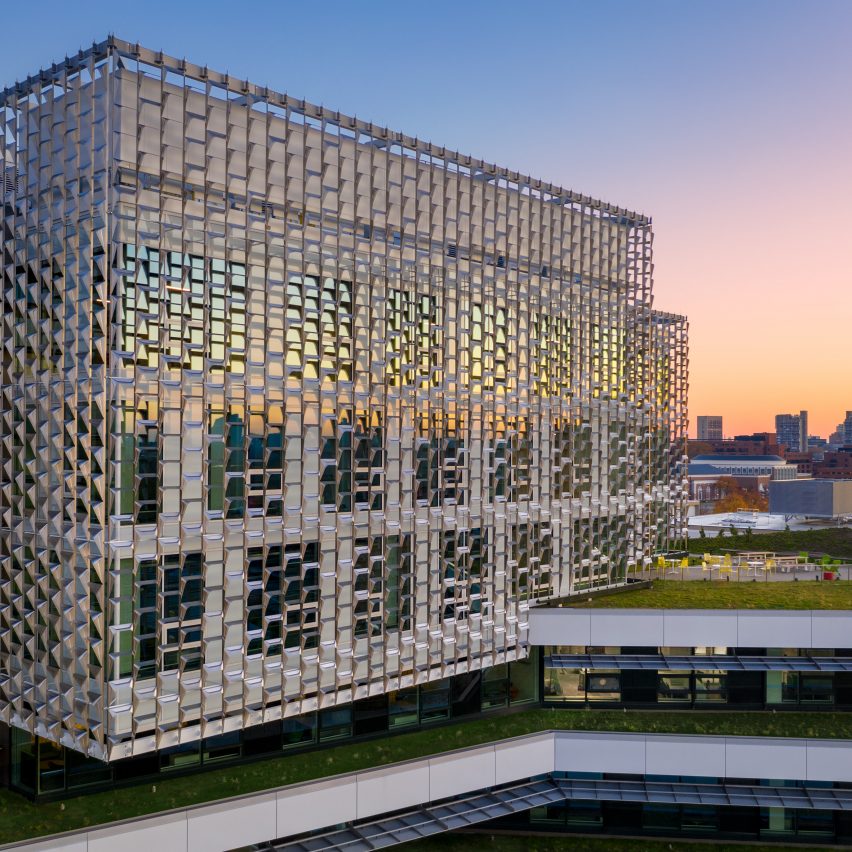 The Boston office of Behnisch Architekten has completed a massive academic building on a new campus for Harvard University that features the “world’s first hydroformed stainless-steel screen”.

The Science and Engineering Complex (SEC) is part of Harvard’s new Allston Campus, which is located just across the Charles River from the university’s main campus in Cambridge. The building sits on a five-acre (two-hectare) site along Western Avenue, a key thoroughfare.

The research and teaching facility houses the John A Paulson School of Engineering and Applied Science. It accommodates people working in a range of fields, such as robotics, bioengineering, applied physics and mechanical engineering.

The building is designed “to inspire learning and scientific discovery while showcasing sustainability”.

“Its forward-looking design reflects the advanced, world-class spatial and technological solutions of its faculty and staff who are meeting the complex, changing requirements of scientific inquiry,” said Behnisch Architekten, which is based in Germany.

The complex encompasses 544,000 square feet (50,539 square metres) and is roughly rectangular in plan.

“This creates a visual rhythm along the nearly 500 feet of street frontage analogous to more traditionally scaled structures, while maintaining the continuity of the program in a single building,” the team said.

The exterior has a layered appearance that is meant to establish an identity for the complex while also calibrating its scale.

The upper portion features the world’s first hydroformed stainless-steel screen, according to the architects. Hydroforming is a special type of die moulding in which metal is formed using highly pressurised fluid.

The screen was precisely designed to mitigate solar heat gain during warm months while allowing sunlight to penetrate during the winter.

“The screen also reflects daylight towards the interior while maintaining large view apertures,” the team said.

Lower portions of the buildings have different facade treatments, including long-span glass walls and ribbon windows.

Within the building, the team aimed to create flexible spaces that foster collaboration and interdisciplinary working. 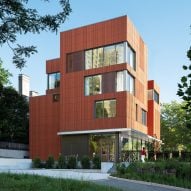 The lower level also has a cafe and a stepped seating area that looks toward a courtyard.

Laboratories are found on upper floors, where they are afforded more privacy and security. Multi-level lounges are situated between the research blocks. Labs were designed to change as needed.

For interior finishes, the team used materials such as exposed concrete and glass to create an open atmosphere. Wood was used for flooring, stairs, seating areas, work bars and benches.

The project has achieved LEED Platinum certification from the US Green Building Council.

It also has earned certification from the Seattle-based International Living Future Institute under its Living Building Challenge – one of the most rigorous green-building certification programmes in the world. The interior spaces have earned “petal certification” in the categories of materials, beauty and equity.

Behnisch Architekten was started in 1989 by Stefan Behnisch and today has offices in Stuttgart, Munich and Boston.

Other projects by the firm include the renovation and expansion of a business school at Portland State University, and the design of a German energy laboratory with walls made of translucent polycarbonate panels.

The photography is by Brad Feinknopf.