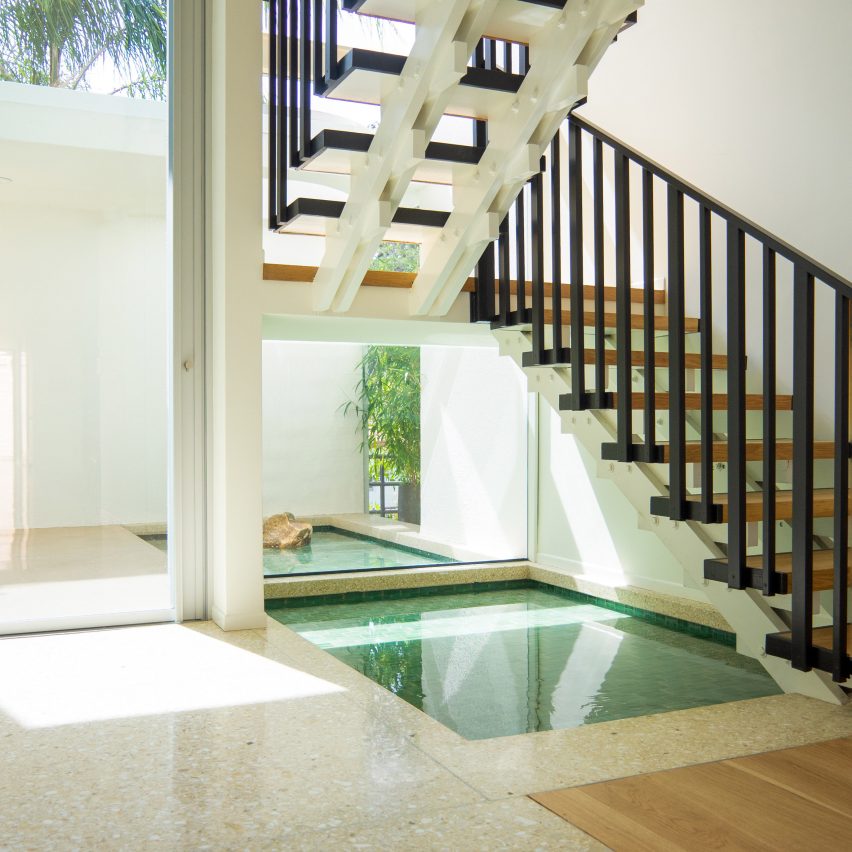 Originally built in the popular mid-century modern style by Wusthoff and Gallian, the 427-square-metre home had fallen into disrepair, prompting its new owners to commission Los Angeles-basedHeusch to revamp the home.

“The dialogue with the existing conditions formed the starting point for the design,” said the architects.

“The renovation tried to carefully restore some of the features and materials that were found, either still existing or shown in old photographs,” adding that the home had undergone some “unfortunate transformations”.

At the entrance, the architects uncovered an existing water feature, which had fallen out of use over the years. They also took the opportunity to restore a monumental entrance door that had been shortened.

“An abandoned pond at the entry was restored, and the original two-metre wood door with high transom was replaced by a 5.5-metre-tall pivoting glass door,” the team explained.

Heusch’s renovation opens up the ground floor, converting a previously enclosed kitchen. The updated kitchen and dining room overlooks the generous backyard and pool, which are accessible via sliding glass doors.

“The kitchen and dining area were opened up and expanded into one continuous space along the main axis of the residence,” said the architects.

“A larger terrace in front of this main space ensured indoor-outdoor living and dining, an essential feature of southern California architecture of that period,” they added.

The first floor also features a separate living room, as well as a guest bedroom.

Upstairs, the primary bedroom was reconfigured, opening up the south-facing wall to create a layout that allows the bedroom and bathroom both receive natural light.

With this new configuration, sliding glass doors from each space open out onto a terrace, which overlooks the pool below. This wall was originally built without windows, with only a pair or doors leading outside. 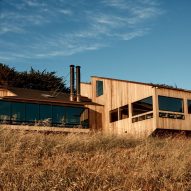 Heusch also selected the material palette to reference the mid-century style, with choices such as terrazzo floors, dark-hued wood and decorative stone accents. On the ground floor, the terrazzo is original, and was restored rather than replaced.

“The terrazzo, the tile, the wood, and the fluted glass express the original character of this residence,” said the studio, which was founded in 1991 by Gerhard Heusch, and has offices in LA and Paris.

Other projects by Heusch include a renovation to the architect’s own home to create an office within his living space, and a property overlooking the city’s iconic Mulholland Drive.

The photography is by Gerhard Heusch.