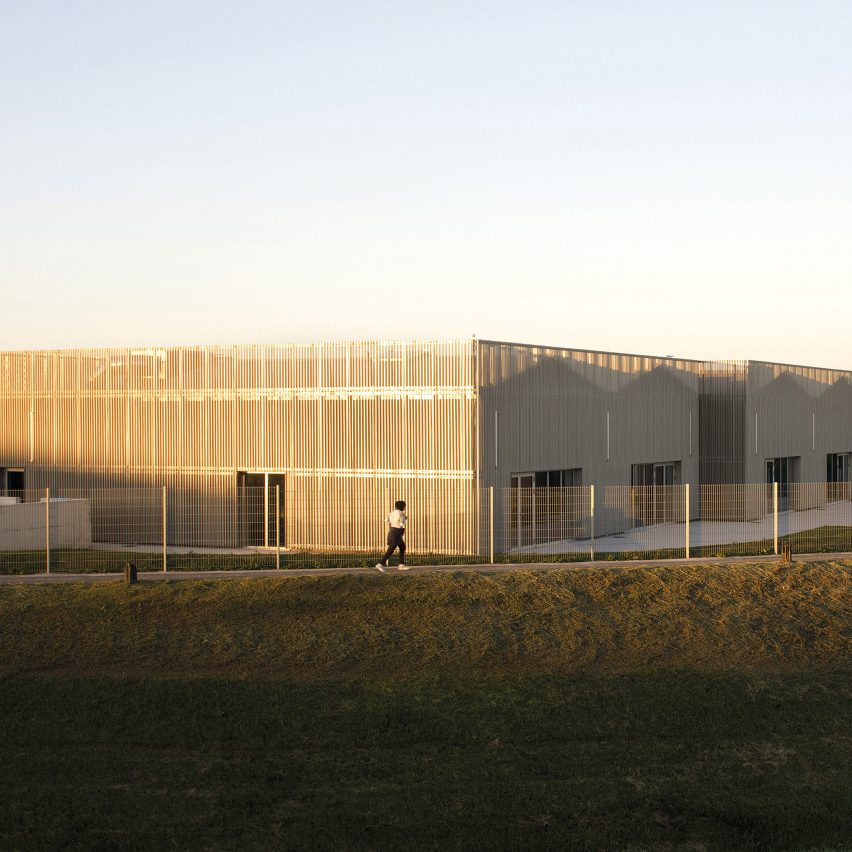 This multipurpose events hall designed by French studio Graal Architecture evokes typical gabled houses as well as the industrial sheds found near to its location beside Paris-Orly airport.

Orly Festival Hall is located on the edge of the airport complex to the south of Paris, and forms part of a suburban neighbourhood made up of residential and logistical buildings.

Graal Architecture designed the festival hall as a pavilion consisting of four interconnected gabled volumes that resemble typical houses. Its flexible and modular design allows the building to be used for various events.

Corrugated and perforated metal cladding forms a rectilinear envelope around the pitched-roof volumes, lending it a more industrial appearance that recalls the nearby sheds and warehouses.

“Halfway between a low-cost prefabricated industrial structure and an ordinary house, the building unfolds in two cubic volumes of the same dimensions, which attempt to move away from the typology of the shed to approach the domestic scale of the house,” the architects explained.

The metal cladding extends beyond the height of the pitched roofs, creating a more visible volume within the suburban streetscape that changes in appearance when viewed from different distances and angles.

“Through its champagne colour, its undulations and perforations, the thermo-lacquered, corrugated iron cladding offers a changing and renewed image of the facility through the play of reflections and transparency,” Graal Architecture added.

“Depending on the light, the distance and the viewpoint, which is multiple on this angled plot, the building creates a real kinetic effect.”

The building is separated into two conjoined blocks that are shifted slightly in plan to fit the irregularly shaped plot. The space in the offset area forms an entrance plaza sheltered from the noisy airport.

A block of service areas including the entrances, toilets, offices and technical spaces are arranged along the northern edge of the building so they are direct contact with the car park and a small concrete plaza.

Three entrances along the building’s length provide access to different parts of the hall, allowing each space to function independently and enhancing the facility’s flexibility.

The building was constructed using a timber frame that is visible inside the hall and is complemented by the exposed timber walls and structural roof panels.

The prefabricated framework supports a series of deep beams that span the hall from front to back. Tracks incorporated into the beams allow movable walls to be used to partition the interior into two or three rooms.

The four roof ridges help to visually separate the open, flexible space into smaller bays while also aiding its acoustic properties. Each bay features large windows on its southern facade that look out towards the airport.

Lighting and acoustic baffles that follow the folds of the roof help to break up the overall scale of the internal space. Skylights slotted into the roof’s ridge cast natural light onto the timber beams and the concrete floor below.

Graal Architecture was founded by Carlo Grispello and Nadine Lebeau. The firm has previously designed an energy-efficient and economical facility for small children that was longlisted in the civic building category of Dezeen Awards 2021, and a sports hall for a nursery in western Paris comprising three corrugated zinc and galvanised steel cabins.

The photography is by Clément Guillaume.