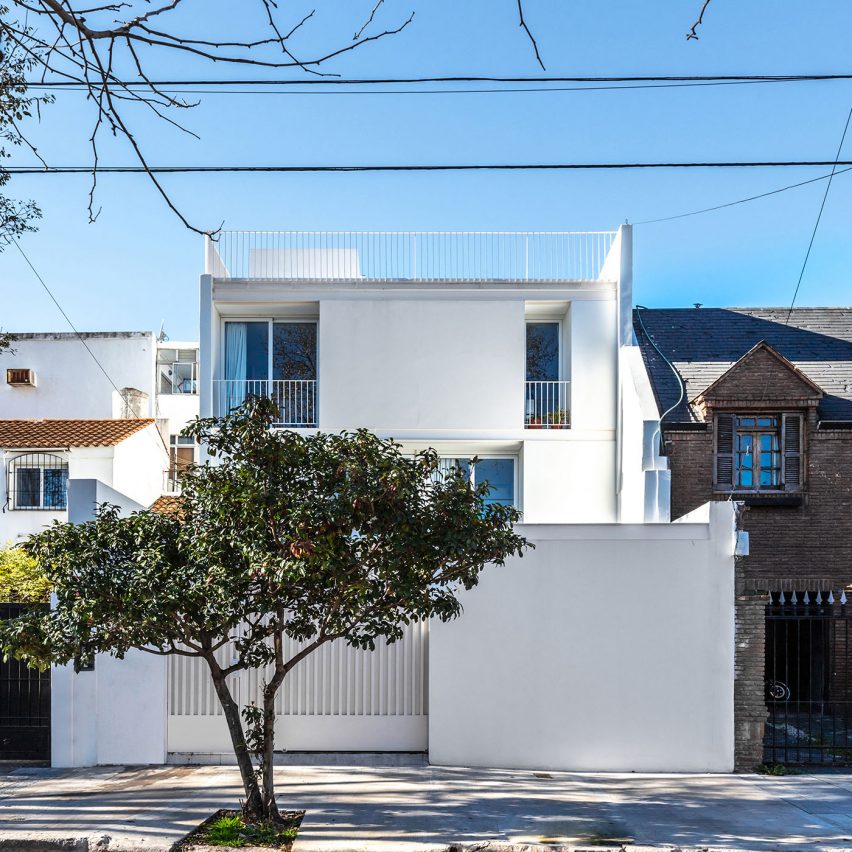 Argentinian architectural office Colle-Croce has designed this white home on a compact lot in Buenos Aires to make the most of the available outdoor space.

Colle-Croce, based in the city, completed Casa Tronador for an infill lot between two existing party walls, in a neighbourhood that includes a mix of private homes and shops.

The architects decided to place the living areas at the back of the plot.

This decision opens up the ground floor to a terrace, which has a reflective pool in order to provide a tranquil atmosphere. Overhead, steel beams run across the garden.

The 150-square-metre home includes three bedrooms, and is laid out over as many floors. The ground floor includes the home’s entertaining areas, which open to the yard via sliding glass doors.

The yard also contains an outdoor kitchen, a key feature in many Argentinian houses due to the nation’s tradition of asado – communal grilling.

At the front of the property is another small exterior space, giving the dining room access to fresh air from two sides.

“The ground floor, the living room, dining room and kitchen expand to the garden,” said Colle-Croce.

“Every first category space ventilates to a yard whose proportion and orientation allows excellent conditions,” the studio added. “The backyard allows natural lighting at the services spaces, providing cross-ventilation.” 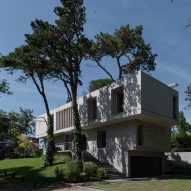 On the first floor, the architects included two bedrooms, which share a bathroom on the landing. The second floor contains the primary bedroom, which enjoys its own ensuite and a walk-through closet.

Within each of the bedrooms, Colle-Croce included a small balcony that looks out onto the terrace. The rooftop has an expansive terrace, which the architects describe as a “lookout” to see the neighbourhood better.

A restrained palette was applied to the house, rendering in white almost every surface, including walls, cupboards, railings and beams.

The flooring on the upper levels were left in a natural wood finish. On the ground floor, tiles match the exterior paving.

Colle-Croce is led by Sebastián Colle and Rodolfo Croce, who both attended the University of Buenos Aires, and together oversaw this project.

Other projects in the Argentinian capital include a residence that is topped with arched brick vaults by Fabrizio Pugliese, and a home in the outskirts of the city by Barrionuevo Villanueva Arquitectos that marks its entrance with a dramatic cantilever.

The photography is by Federico Kulekdjian.