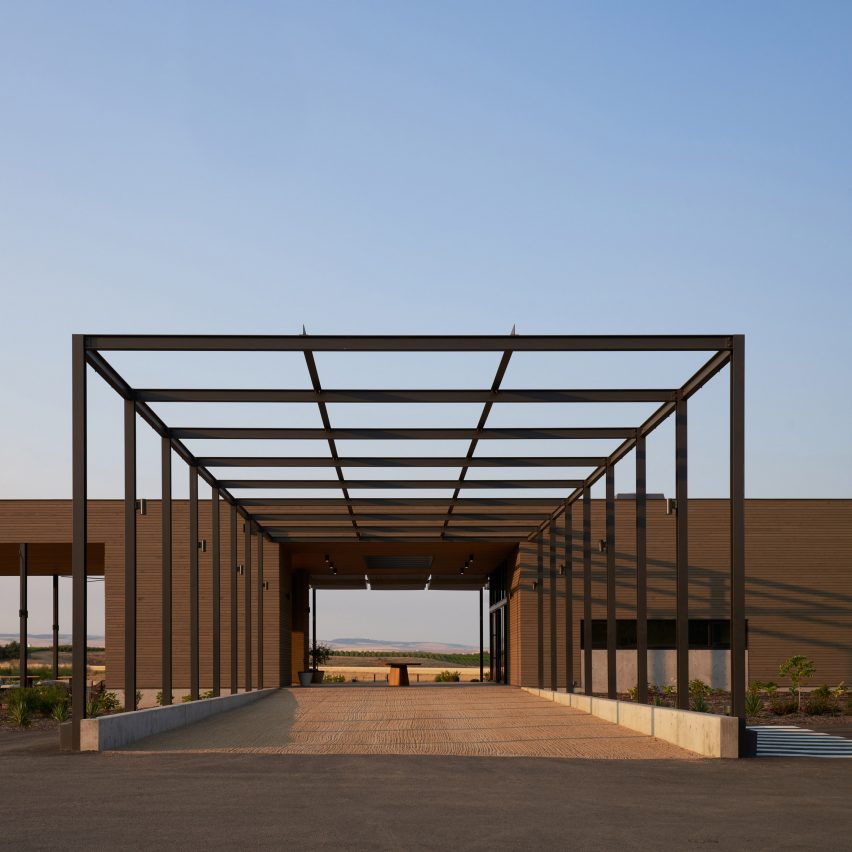 Cedar cladding and a rigorous structural grid feature in a winery tasting room by American studio GO’C that is designed to frame views of the terrain.

Alton Wines is located just outside of Walla Walla, a city in southeastern Washington.

The winery hired Seattle’s GO’C, formerly known as goCstudio, to design a tasting room and wine garden for an unusual site – a curved piece of land that sits in the crook of sloped vineyards.

“Deemed ‘unfarmable’ due to the soil makeup and location in the crook of the vineyards, the owner and farmer of the land had been waiting for the right opportunity to build something special,” said GO’C.

The clients wanted a building that was sensitive to the environment and embraced the landscape. They also desired outdoor space with shade – an important consideration given the region’s dry, hot summers.

In response, the architects conceived a single-storey building that sits quietly in its cove-like setting.

Rectangular in plan – and utilising a rigorous structural grid – the building consists of a tasting room and wine garden that are separated by a covered breezeway.

Rising up from a flat roof is a chimney stack, which helps anchor the building, and an extruded skylight that ushers in natural light.

Exterior walls are clad in a cedar rainscreen. The northern side is relatively opaque, while the southern facade is lined with large stretches of glass.

The whole building is meant to frame particular views of the scenery.

“The architecture acts as a frame, bringing the landscape closer into focus and a part of one’s immediate experience,” the team said.

The architects put special emphasis on the arrival sequence.

Visitors approach from the north and pass under a long arbor made of steel. Grape vines will eventually wind through the structure, providing visual appeal and shade.

The arbor terminates at the building’s breezeway, which was conceived as a terrace.

“This dramatic approach captures and accentuates the view of the Blue Mountains seen through the terrace between the two buildings,” the team said.

The west side of the building holds the tasting room, where guests are encouraged to linger.

The bright and airy space features concrete flooring, a wooden ceiling and contemporary decor. A large, steel-faced fireplace has a plaster surround and a built-in wood store.

Lining the south-facing wall are sliding doors that enable the room to spill onto a patio. Overhead, a canopy is formed of billowing fabric panels that are retractable. 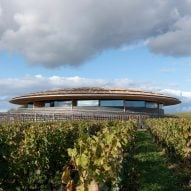 The wine garden is on the facility’s east side, where one finds outdoor lounge furniture and bar-height tables.

Overall, the facility’s outdoor spaces expand the usable area and enables guests “to tailor the winery experience to their needs”, the team said.

GO’C was founded in 2012 by Jon Gentry and Aimée O’Carroll. The firm has completed a number of projects in its home state of Washington, including a Seattle apartment that doubles as a photographer’s studio, and a floating wooden sauna that was partly funded by a crowdfunding campaign.

The photography is by Kevin Scott and Veekster.

The post Alton Wines by GO’C is wrapped in structural grid that frames vineyards appeared first on Dezeen.