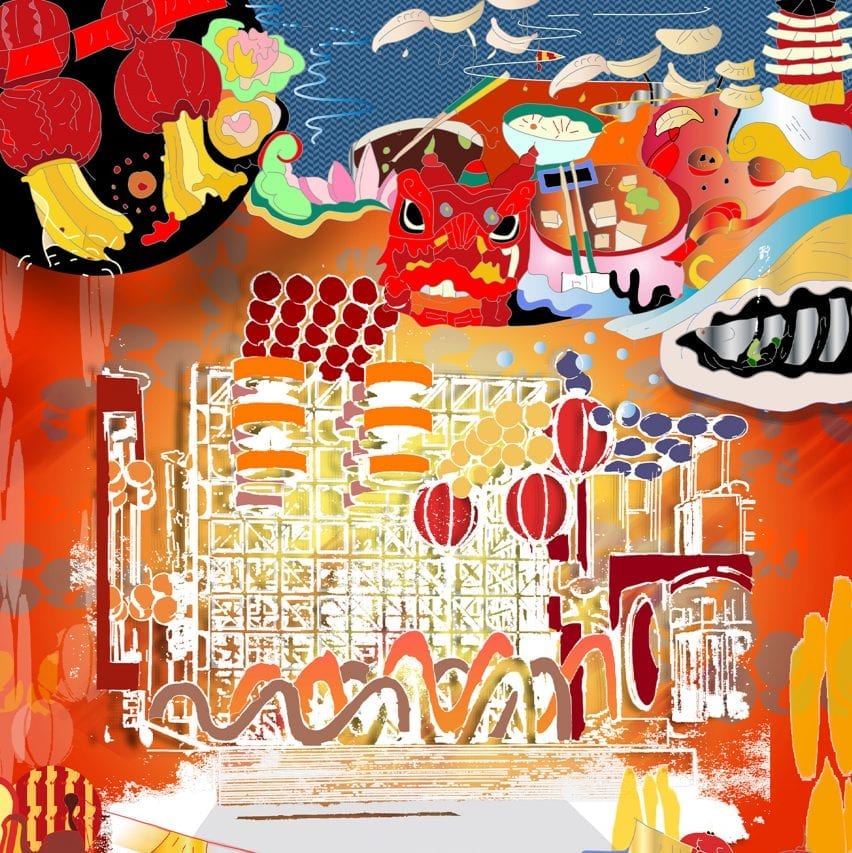 A tower designed for Ontario wildlife and a gold mine transformed into a soundscape feature in this school show from students at the Azrieli School of Architecture and Urbanism.

Other projects include an analysis of a hotel militarised in the Lebanese Civil War and a utopian world referencing the childhood memories formed in a Chinese-Canadian family.

Azrieli School of Architecture and Urbanism

“Many of the projects represent work from the year-long Master of Architecture thesis, including the Canadian Indian Residential Schools as potential sites of decolonization, remedies for the post-pandemic city, and Cairo’s Cosmic Realms and Earthly Realities.

“Also represented is work from the first MArch studio year in the three-year programme, the fourth-year fall housing studio and the final studio in the undergraduate Bachelor of Architectural Studies Major.” 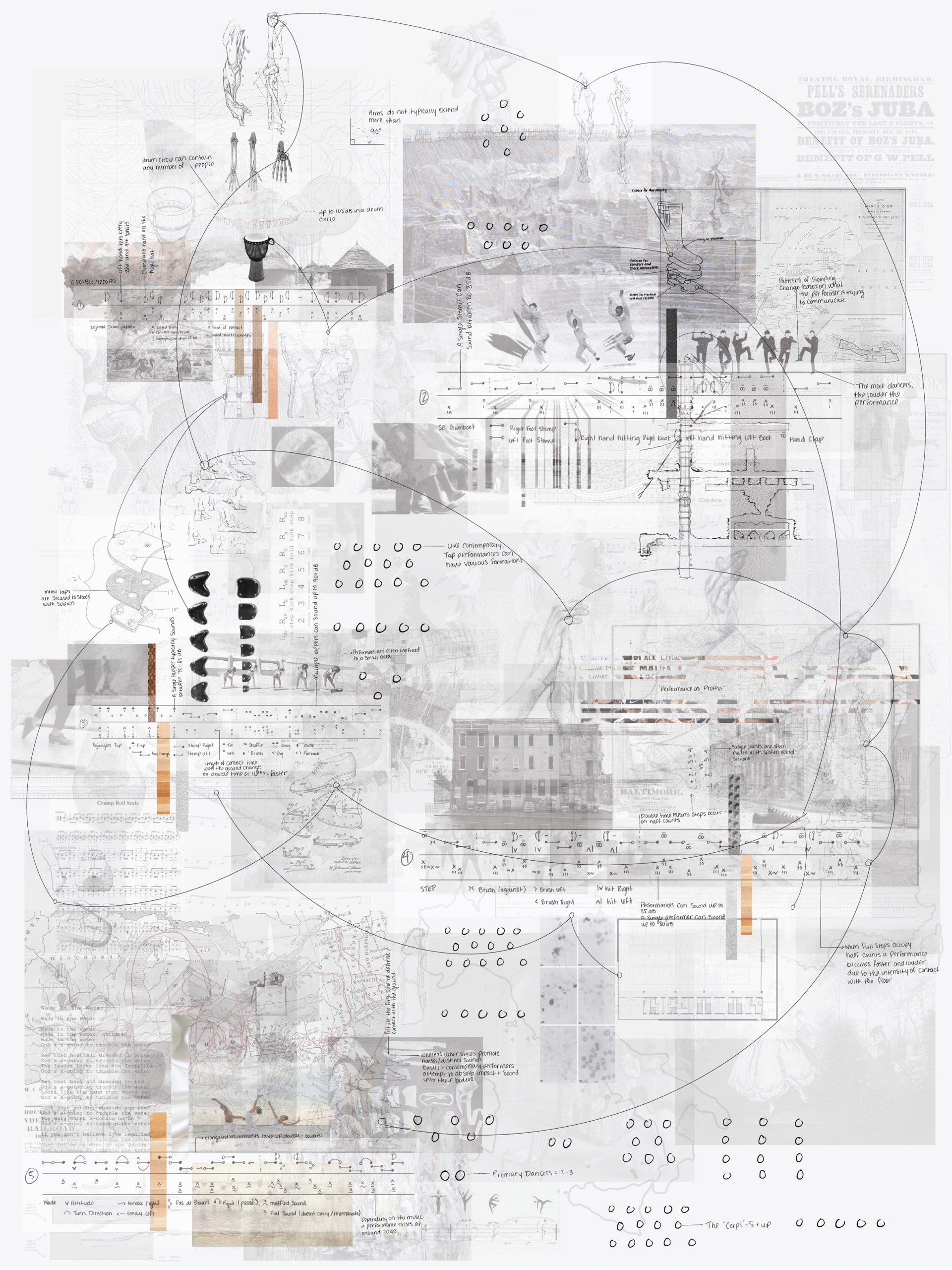 The Rhythm Section by Chloe Cooke

“Through processes of archiving and annotating movement, this project develops new forms of notation attempting to communicate social and spatial histories related to dance, choreography, rhythm, and sonic production as a result of bodily movement.

“The project also explores drawing as percussive performance, combining different styles of rhythm that are inherently connected and work together to reveal lines of flight, in which dance serves as a threshold to connect displaced people. This is done by creating – or recreating – spaces, narratives, performances and rhythms that beat ‘new worlds’ into being.”

“This thesis explores the spatial conditions related to the territorial and architectural practices of the Indian Residential Schools (IRS) in Canada. The project alludes to ‘illustrative futures’ where the conservation of landscapes, architecture and territories means designing encounters for healing and critical reflection.

“This project reverses the degradation of bird habitats in the industrial landscape of Hamilton Harbour, Ontario, transposing conditions found in adjacent ecologically productive sites to barren industrial areas along the harbour’s edge.

“Among several interventions, a series of ethereal bird towers reach to the sky, incorporating lightweight components for bird feeding, nesting, bathing, and perching above with spaces for human observation below. The tower’s height attracts avian wildlife to the site and encourages birds’ natural capacities for distribution, pollination, and ecological exchange. The project was developed using a series of models constructed within water tanks, immersing the towers within their atmospheric domains.” 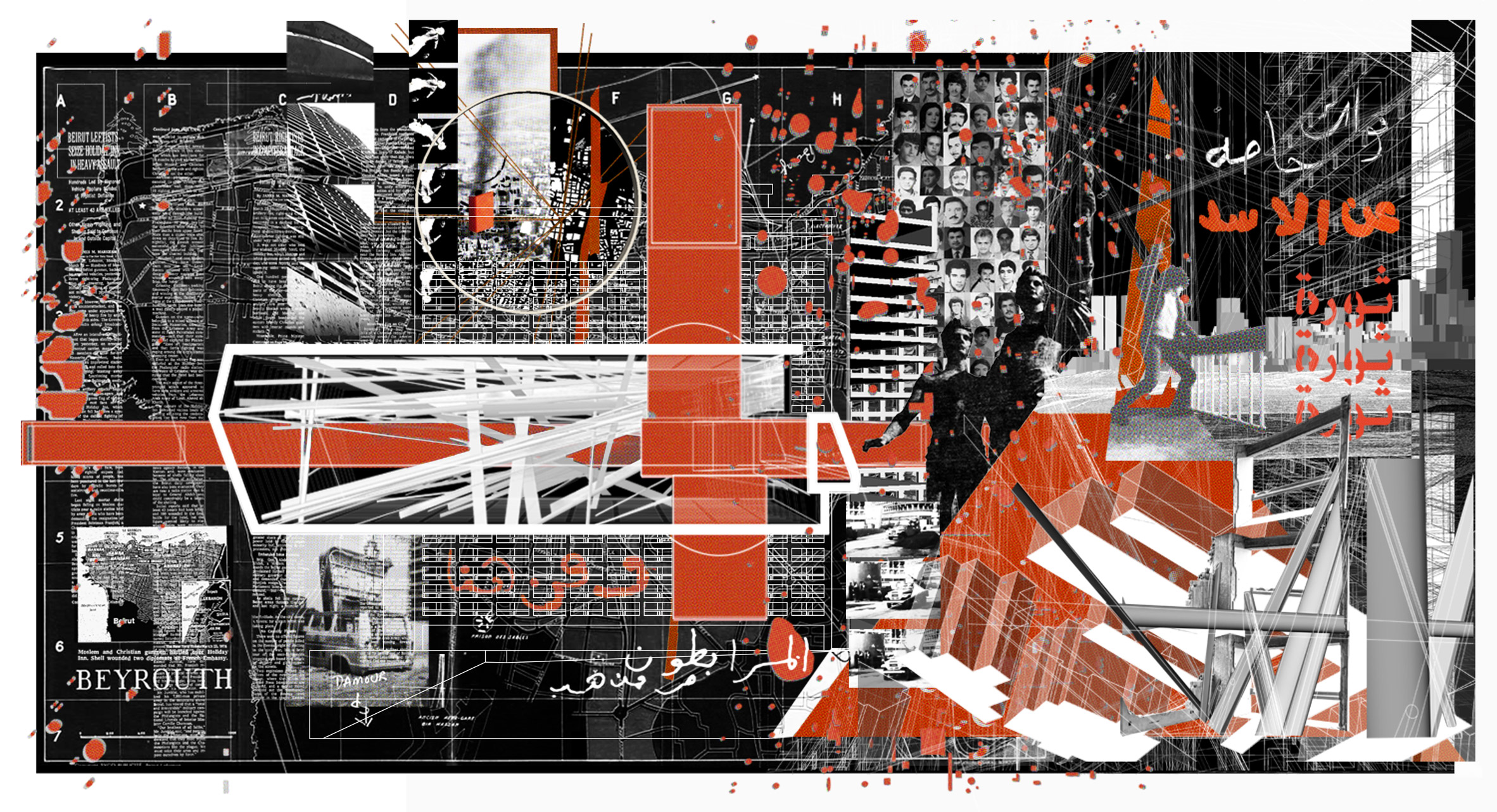 “Among the relics of the Lebanese Civil War is the Holiday Inn Beirut. During the civil war, the hotel was militarized. Its towering body offered fighters – from leftist and rightist militias – a stronghold from which to launch their munitions. Still standing, it has been called an unintentional monument.

“This series of drawings seek to negotiate between the Holiday Inn Beirut’s identity as an apparatus of war and a monument. Here, it becomes an urban observatory, allowing visitors to witness the city’s past, present and future. Various layers are superimposed upon one another to embody the complexities and contradictions inherent in the capital city of Beirut.” 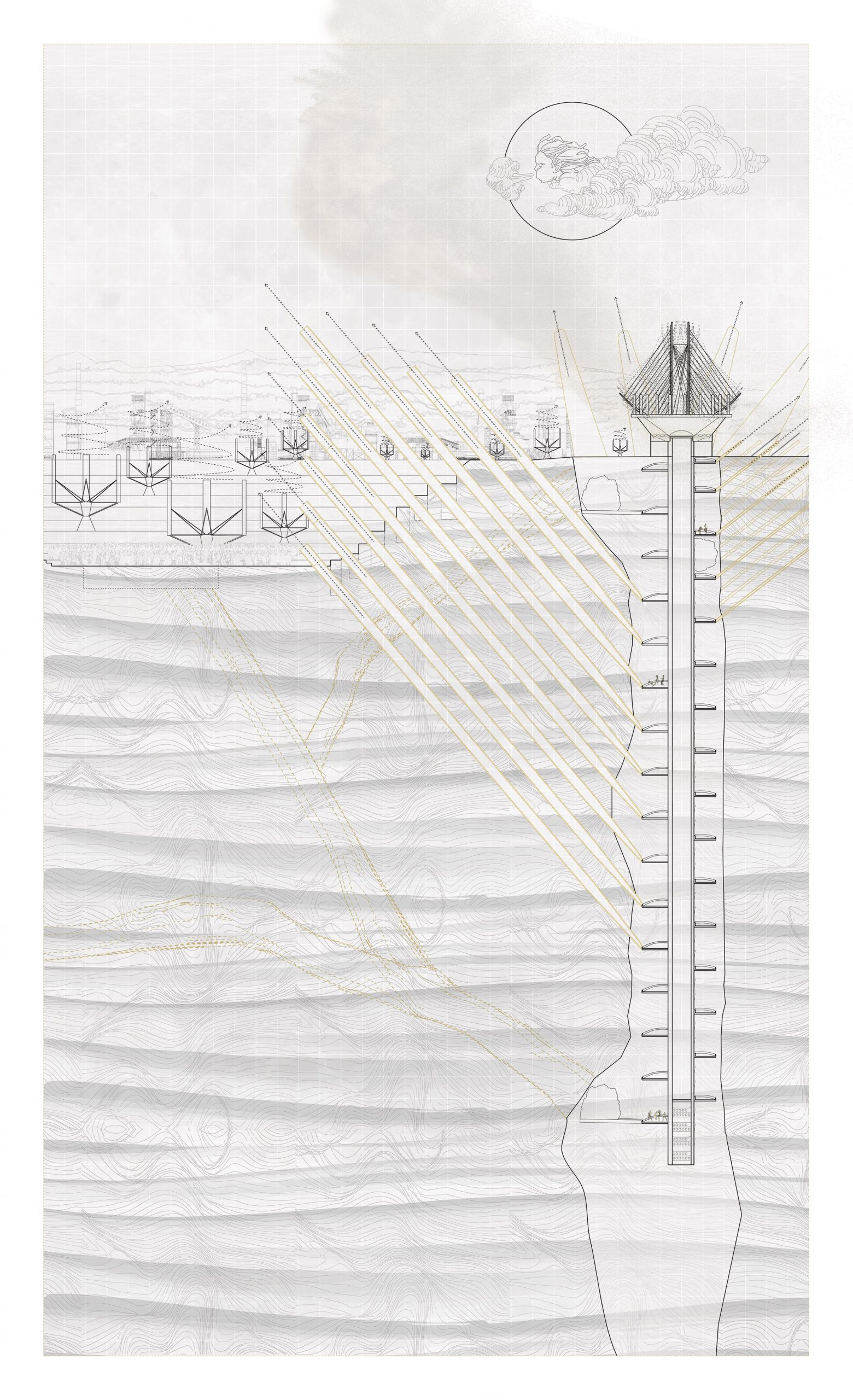 “This project explores a fictional future in which the Mponeng Gold Mine in Johannesburg is transformed into an eerie soundscape. Eternally conducted by the wind, water, and heat, this musical ensemble disrupts the humdrum of daily life by giving voice to the land.

“When wind speeds are low, the pit and shaft become a celebratory space. The hollow amphitheatre floors become drums when people gather, such as during the toyi-toyi or when dancing to amapiano. When wind speeds are high, the wind turbines funnel air into reservoirs beneath the amphitheatre channelling it through the shafts and tunnels sounding the pipes.” The Globe in a Granule of Cryoconite by Sean Broadhurst

“In response to a prompt to read place from afar, this project aggregates research into a story of cryoconite in the glacial crusts of Qikiqtaaluk, Nunavut. In its bacteria-bound mineral cocoons that entrain airborne particulates, cryoconite authors stories of planetary relations. The embedded time and spatial scales of cryoconite subvert cartographic convention.

“The globe is distorted, and the section refuses scale; isometric space is warped by isotopes of plutonium or neon that signal colonial violence or possible cosmic origins. Drawing the immense micrometres of a single granule requires registers tuned to disparate moments and places at the thresholds of human perception.”

“Āyat al-Qāhirah explores Cairo’s sacred architecture as a mediator where the human, the landscape, and the cosmos collide and merge. The project analyzes how architecture and architectural representation can become a bridge between the earthly and the cosmic.

“The thesis proposes a conceptual network of thresholds between the sacred and every day. These serve as registers for the visible and the invisible. They connect the seen and unseen, the sensible and unintelligible, the physical and metaphysical, the quotidian and divine. The work aims to manifest the hidden orders imposed on the material world through motions of the cosmos and earth.” 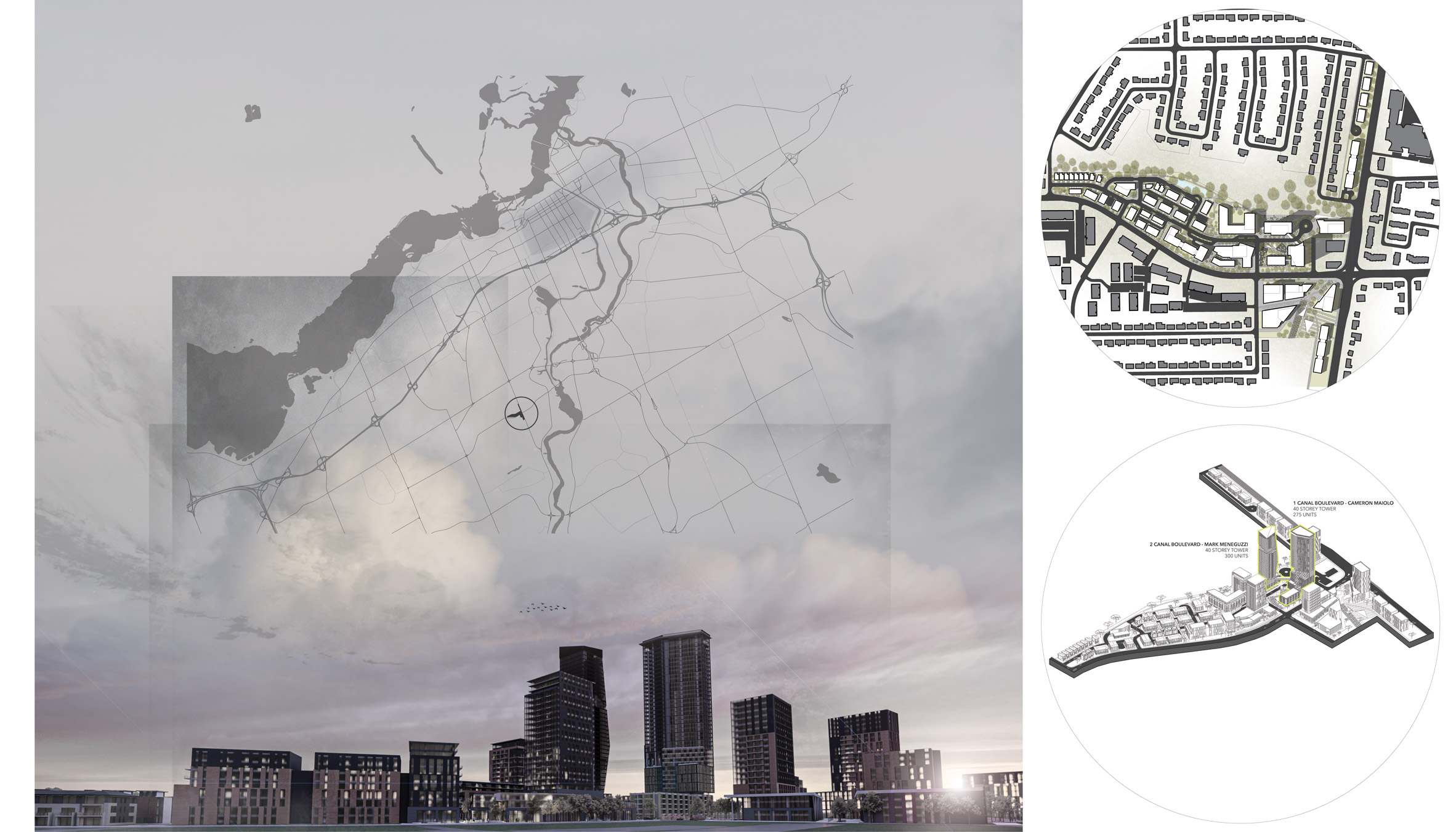 “Working with Minto Development Group, we wanted to explore increasing density, integrating nature within the built environment and creating a well-rounded pedestrian-focused urban node. Redeveloping for the future, we strove to emphasise the 15-minute community.

“Our master plan focal point consists of a high-density residential core followed by a mid-density mixed-use residential and commercial district. Adjacent is a low-density housing of mixed typologies. We formed a connection to the park by implementing green fingers that act as stormwater retention systems and promote the vibrant growth of local flora and fauna while also providing green barriers between buildings.” 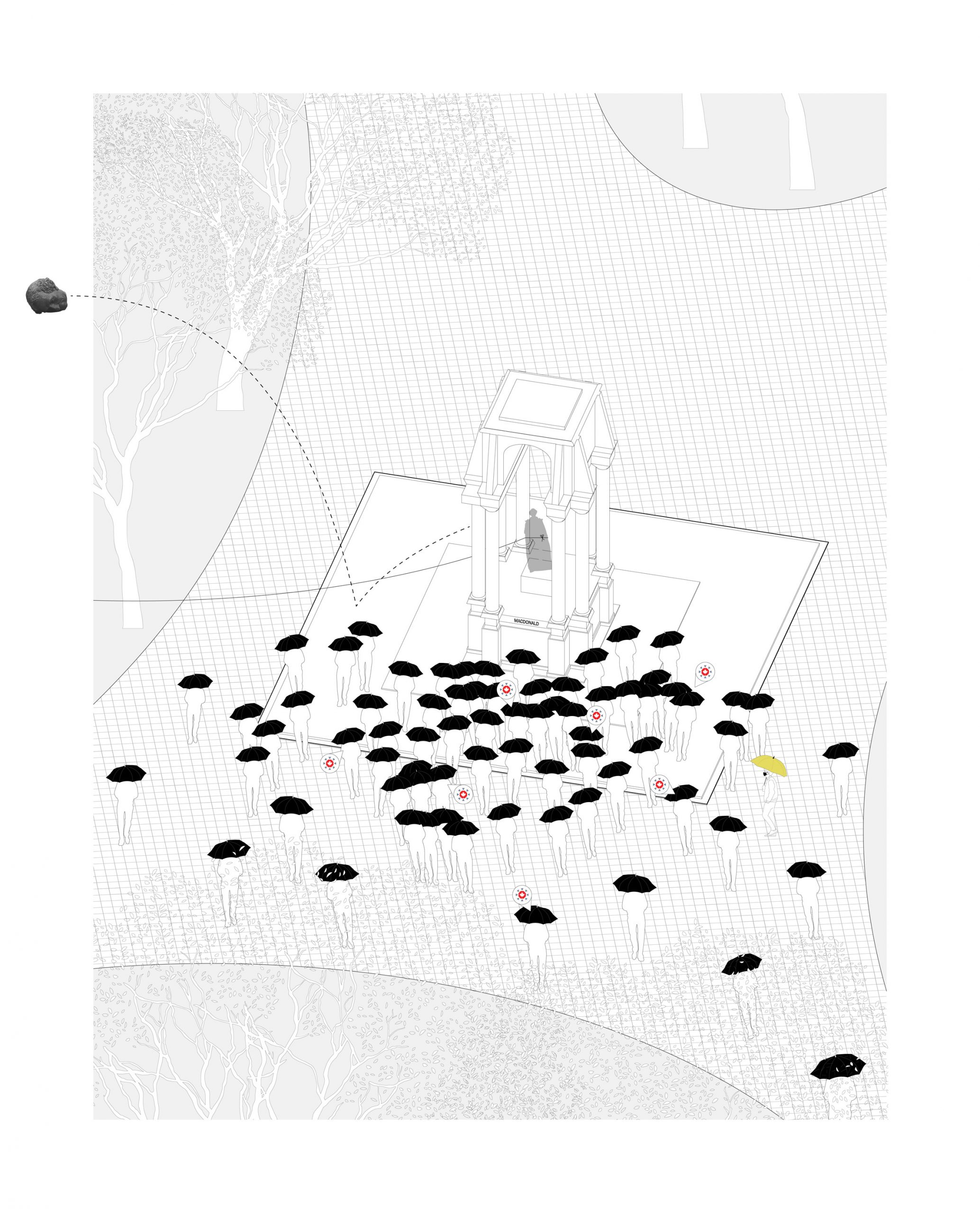 Post-Pandemia at the poissonerie shanahan: an account of sick cities and their remedies by Shannon Clark

“An epidemic is not simply biological but rather a spatial phenomenon that mutates sociopolitical constructions. The fears associated with the metaphors of disease have landscaped the city as though we are looking at “the section of a fibrous tumour,” to quote architect and writer Frank Lloyd Wright in When Democracy Builds.

“The setting is the fictional Poissonerie Shanahan in Montreal’s Jean-Talon Market as envisioned by writer Nicholas Dickner’s Nikolski. Fiction is used as a tool to understand the intersections of architecture, urbanism, and public health. The story of four sick cities is then told to exercise our empathetic intelligence in the face of a global crisis that has rapidly spatialized blame.” 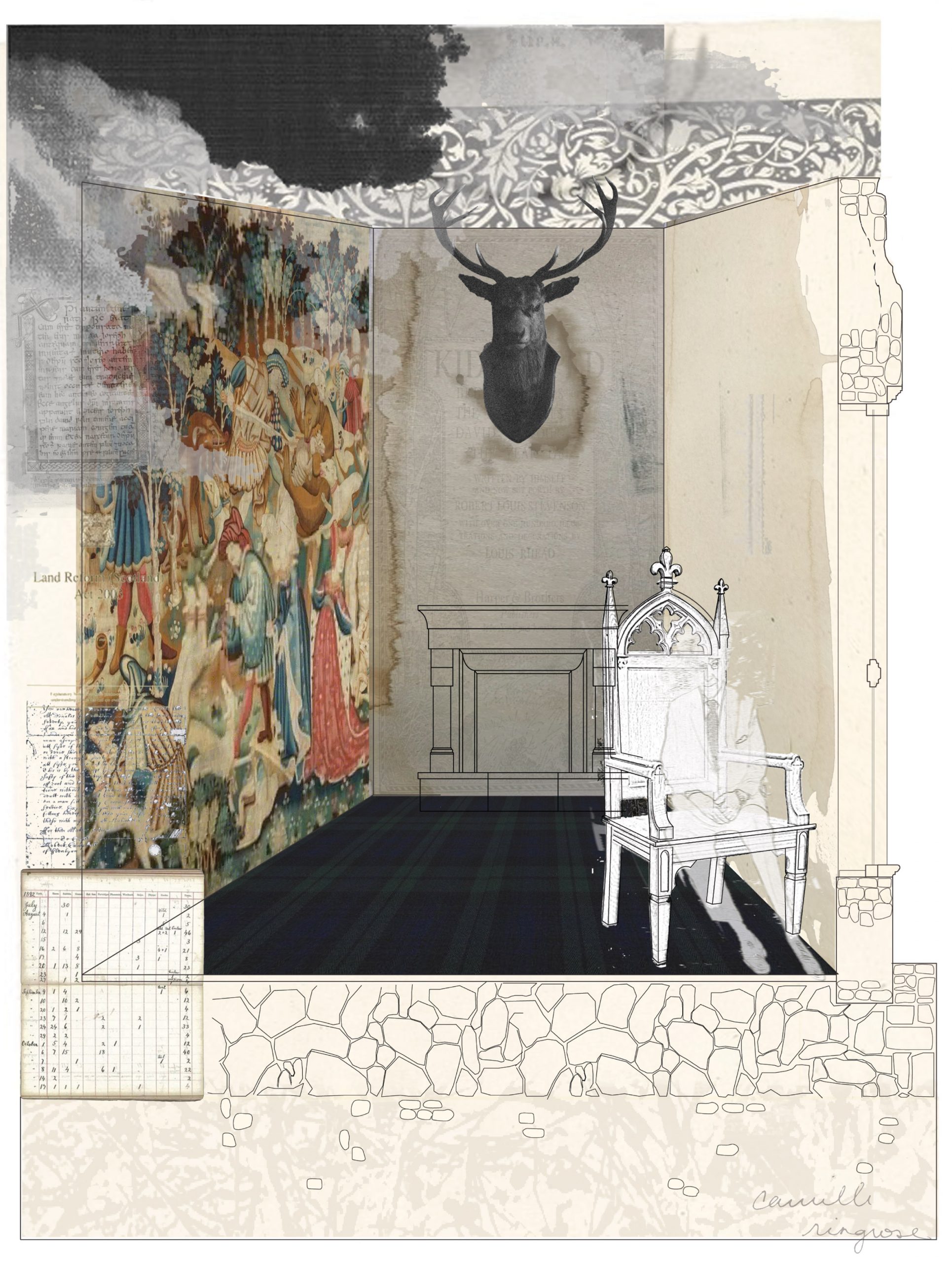 “This thesis proposes a compilation of fictional narratives that reflect on Rannoch Moor as ground, unstable terrain, burial, and wetness. It offers alternative ways of knowing through literature, folklore, and storytelling as a multiverse method of world-building.

“The thesis asks: can we use stories to design with precision? Not as an act of probing for answers, newness, or novelty, but as a form of watching and waiting? Storytelling suggests a movement to look not to the past or the future, but to the deepness of the conditions surrounding us, weaving together a more complex tapestry towards recovery and resilience.”

“This project focuses on reflecting on one’s heritage and childhood memories. It is influenced by Enid Huang’s Chinese heritage as a second-generation Canadian – diaspora. Diasporic Dreamland is developed through the foundation of siheyuan – traditional Chinese courtyards made of four sides.

“It correlates with four traditional Chinese tales and long-term memories that influenced Huang’s childhood upbringing. Using various media, Huang created four drawings as a reflection that blends both cultural elements and childhood memories, to imagine a utopian world that connects her closer to her heritage.” 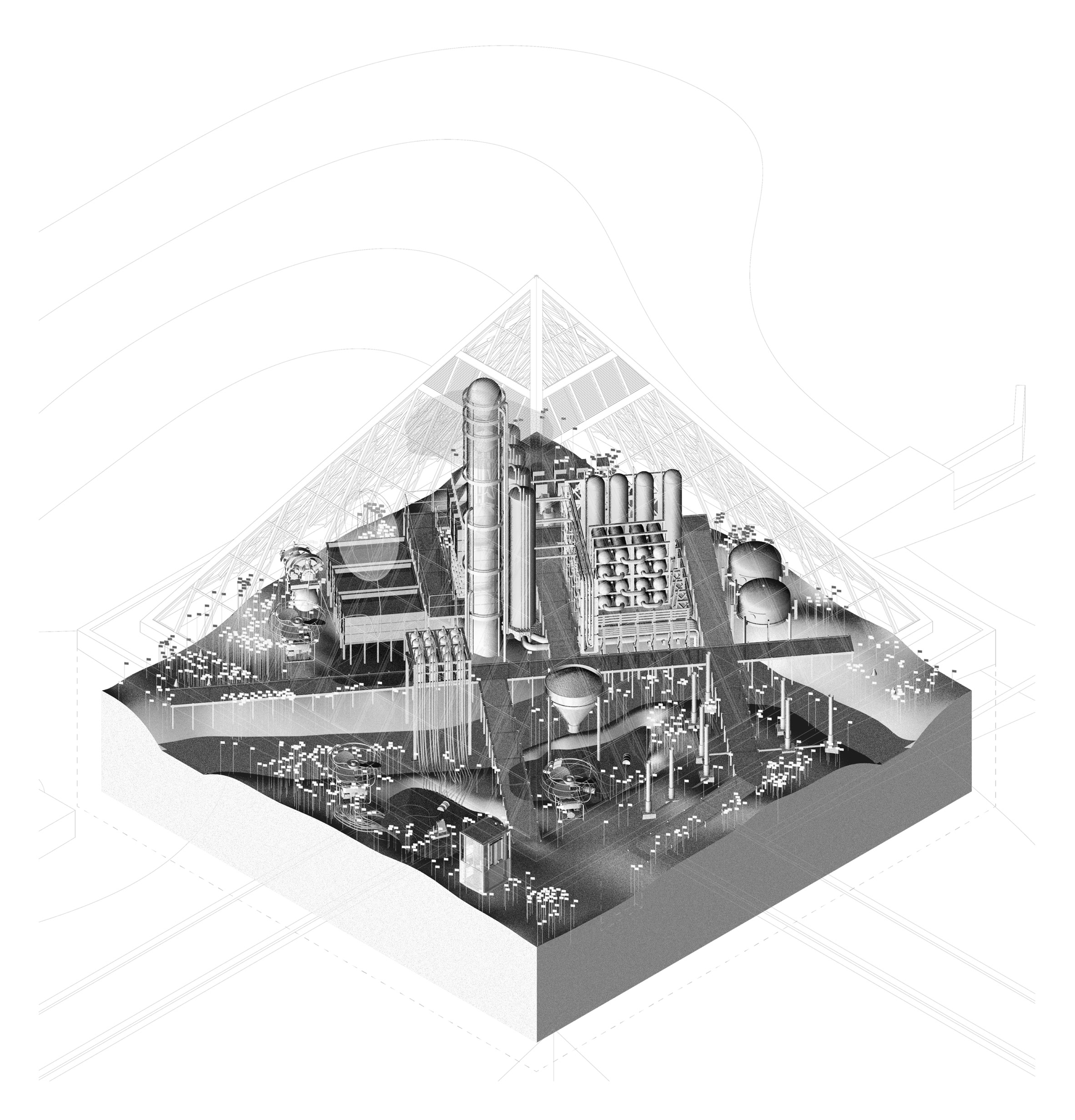 The Bitumen Biome by Odessa Boehm

“Like a Trojan horse, the Bitumen Biome surprises the unwitting visitors of the Muttart Conservatory in Edmonton, Alberta. Instead of visiting an arid or tropical biome, visitors are met with the wild landscape of their backyards, the Athabasca Oil Sands.

“The Bitumen Biome unearths an inaccessible landscape and translates oils origins, systems, and the scale of environmental degradation for its visitors. Through a sensory experience of tailing ponds, chemical diffusers, and bird scare contractions, the Bitumen Biome gives visitors a glimpse into the oil ecosystem and allows them to experience its often intangible effects.”

This school show is a partnership between Dezeen and the Azrieli School of Architecture and Urbanism. Find out more about Dezeen partnership content here.

The post 12 student projects from the Azrieli School of Architecture and Urbanism appeared first on Dezeen.